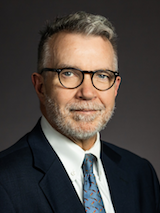 Harold “Mac” Johns has joined ELPO Law as Senior Counsel. Mac has been practicing law since 1982 and has 40 years of experience in General – Civil and Trial Practice, Real Estate Law, Probate, Personal Injury, Negligence, and Insurance Law. He is the former County Attorney for Todd County and serves as Counsel for the Todd County Board of Education, the Todd County Water District, Elkton Bank & Trust Company, and Drive Safe Kentucky. He also works extensively with the Kentucky Association of Counties (KACo).

Mac began his career with the firm of Dillingham and Johns in Elkton. After becoming County Attorney, in his private practice, he has provided legal services to individuals and institutions throughout Western and Southern Kentucky while also for many years serving on the faculty of the Kentucky Prosecutors Institute.